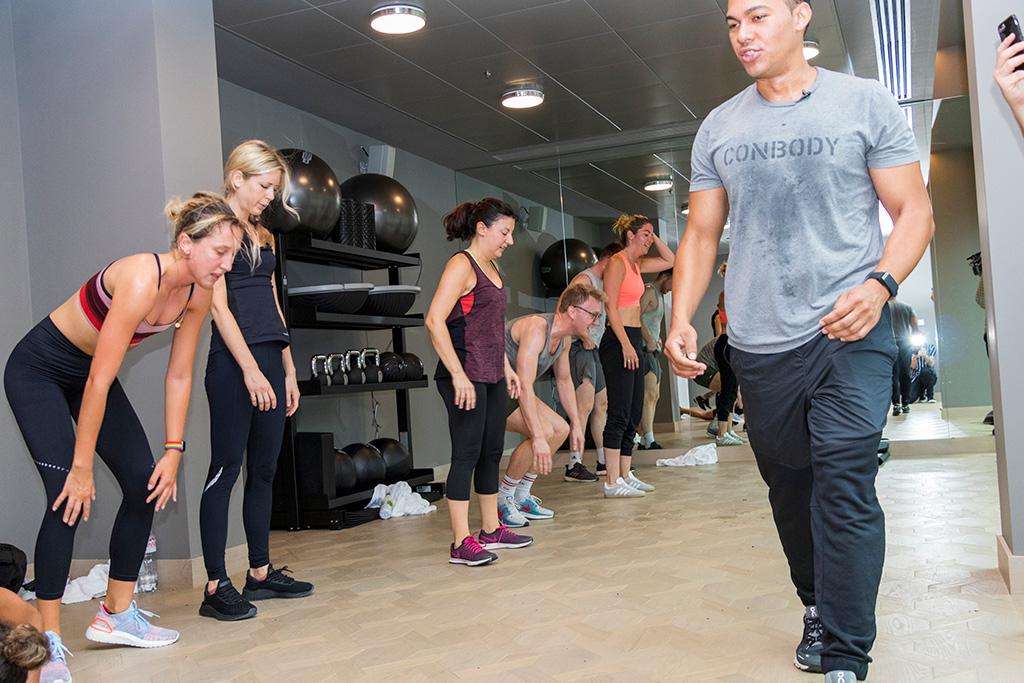 ConBody, true to its name, is a workout program that was developed by Coss Marte whilst serving time in prison. After receiving news from his doctor that his unhealthy habits were taking a toll on his health, he developed an exercise program that could be completed within the confines of his 9’x 6’ cell. The workouts, based on military boot camp techniques, require little space or equipment with ‘inmates’ relying on one-another as equipment and for motivation. Coss himself was the first ConBody guinea pig and after sticking to his program for six months he managed to drop an impressive 30kg!

ConBody’s distinctive brand identity goes further than being just a ‘prison-style workout’. Coss commits to hiring ex-convicts who often face prejudice when making the transition to the working world. Collaborating with non-profits, such as Bounce Back, who help to train and employ those in and leaving prison, help to reform and prevent ex-convicts from returning to prison.

Having experienced huge success with ConBody in NY, Coss set his sights on London as the next destination to get the ConBody treatment. Based in one of the most recent additions to the London skyscraper scene, and designed by the architects behind the Burj Khalifa and One World Trade Centre, the studio is a world away from where ConBody originated.

“Having an account manager has been great. He has saved us a great deal of time and energy in not only getting our business up and running, but supporting us as we grow.”

The Challenges? Finding Software That Could Help to Acquire, Manage and Grow the Business

ConBody caught on to great success garnering a loyal and committed following in New York. Features in the Guardian and the New York Times meant that the business grew exponentially and Coss recognized that his software was no longer fulfilling the needs of the business. Having experienced issues with the studio’s previous software provider, Coss was committed to spending time sourcing the right software rather than spending time learning how to use unnecessarily complicated software:

Our previous gym software almost required technical training; it was just so complicated. There were 50 tabs and you’d be guaranteed to get lost.

With a rapidly expanding business, Coss recognized that he needed software which would serve the needs of a thriving new business.

How has Glofox helped? Providing Support at Crucial Stages of the Business’ Growth

Glofox has transformed how Coss manages his time. Rather than complicating the process, Glofox provides users with the ability to amend classes and timetables with minimal clicks:

I can even use the app to cancel classes and switch things around when I’m on-the-go. It is a much quicker process. The amount of time and effort I have saved by using Glofox is just incredible!

The platform is very intuitive and self-explanatory but if there are things that I am stuck on, I ask our account manager and he is on it like a shot.

Glofox account managers are not only there to support the initial setup but with every stage of your journey by providing on-going assistance as the business grows. Coss recognizes the value in having personalized customer support:

Having an account manager has been great. He has been really responsive to any issues experienced and has saved us a great deal of time and energy in not only getting our business up and running but supporting us as we grow.

What’s next for ConBody?

ConBody is at a very exciting stage with plans in development to expand and franchise the model initially across the US and then globally. Coss also intends to continue to partner with nonprofits in order to help those who find themselves in a similar situation to Coss upon leaving prison and to help turn their lives around.